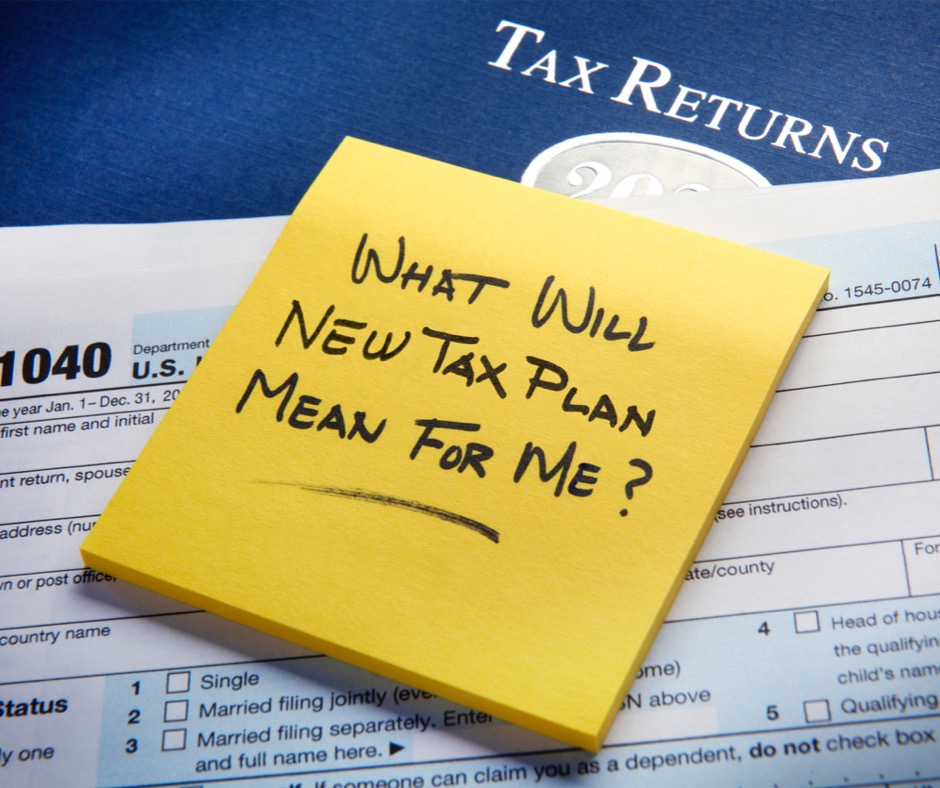 This past April, the Biden administration announced the $1.8 trillion American Families Plan, which would expand access to education, affordable childcare and various tax credits. The plan (as proposed) would largely be funded by additional taxes on higher earners. Since that time, taxpayers have been left wondering whether tax reform could become a reality, and if so, to what extent. While negotiations are still ongoing (hence ‘the wait continues…’), the article below summarizes recent political developments and the outlook for upcoming tax legislation.

Q: Have there been any recent developments on tax legislation?

A: On August 10, 2021, the Senate passed the Infrastructure Investment and Jobs Act, with rare bipartisan support (69-30). The $1.2 trillion package represents roughly half of the $2.3 trillion initially targeted by President Biden earlier this spring, though it marks significant funding for the next five years, with more than $550 billion of new spending.

Shortly after passing the infrastructure package, the Senate passed a $3.5 trillion budget resolution that would clear the way for the Senate to use the reconciliation process to pass broader tax and spending legislation with 50 Senate votes, rather than the typically required 60 votes.

Q: Why is this significant?

A: The Biden administration hoped to pass an infrastructure package earlier this spring, though such legislation was delayed over political wrangling on what exactly constituted infrastructure and the total price tag.

Perhaps just as significant, the budget resolution brings Congress a step closer to moving ahead with a reconciliation bill that could adopt many of the tax proposals outlined in this past April’s American Jobs Plan and American Families Plan.

Q: Are the Biden administration’s tax proposals now closer to becoming a reality? What challenges lie ahead?

A: Procedurally, this brings potential tax reform a step closer, although negotiations are far from over.

House Speaker Nancy Pelosi has been adamant that the House would not take a vote on the infrastructure package unless the Senate also passed the larger reconciliation bill. Further complicating this political calculation, a group of nine moderate House Democrats sent a letter to Speaker Pelosi on August 12 stating, “We will not consider voting for a budget resolution until the bipartisan Infrastructure Investment and Jobs Act passes the House and is signed into law.” This is a notable development given a narrow Democratic majority in the House, for which Speaker Pelosi cannot afford to lose more than three votes from her caucus.

The Senate remains evenly divided (50-50) between Republicans and Democrats, with Vice President Kamala Harris acting as the decisive tie-breaking vote. Moderate Democrats such as Joe Manchin of West Virginia and Kyrsten Sinema of Arizona pushed back at the estimated $3.5 trillion price tag and will thus wield considerable power in future negotiations. Shortly after the recent votes, Senator Manchin noted, “I have serious concerns about the grave consequences facing West Virginians and every American family if Congress decides to spend another $3.5 trillion.”

A policy expert recently remarked that the views of the Democratic party are not monolithic. The reality is Speaker Pelosi and Senate Majority Leader Chuck Schumer must strike a balance between progressive Democrats who view Congressional majorities, however slim, as an opportunity to pursue broader objectives and moderate Democrats who are wrestling with the cost of current proposals.

Q: Will the tax proposals in the upcoming reconciliation bill differ from those outlined earlier this year in the American Jobs Plan and American Families Plan?

A: It is simply too early to say, as a future reconciliation bill could choose to include, amend or entirely reject past proposals.

Currently, the consensus view is that tax proposals outlined this past spring (captured below) are likely to be revised, if included, in future tax legislation: 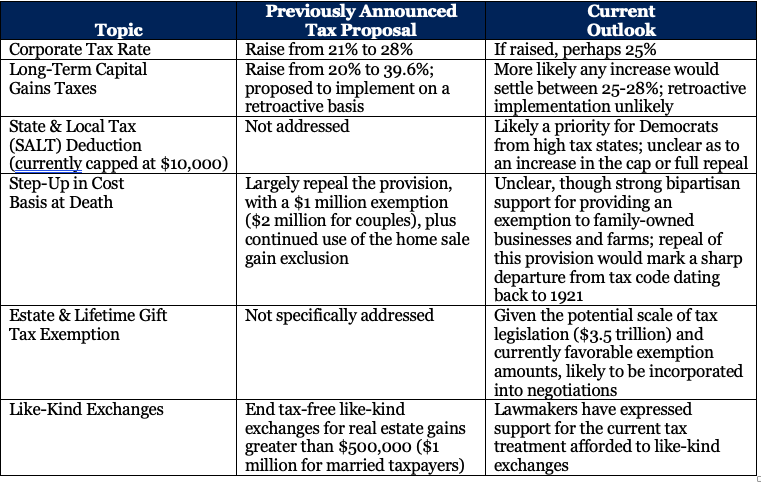 Q: Congress is currently in recess; how does that impact the timeline for legislation?

A: The House was scheduled to be on recess until September 20, 2021, although Speaker Pelosi and Majority Leader Steny Hoyer announced the chamber will be back in session the week of August 23, 2021, to consider the Senate-approved budget resolution.

The Senate is scheduled to be on recess until September 13, 2021, although Senate committees will likely use the next several weeks to advance efforts for reconciliation legislation.

Legislation appears gridlocked for the time being, so long as Speaker Pelosi holds to demands for the Senate to pass a reconciliation bill prior to the House considering the infrastructure and reconciliation packages.

Q: Will taxpayers have time to prepare ahead of tax changes becoming effective?

A: The Biden administration and Congressional Democrats have a goal of passing tax legislation prior to year-end. Naturally, taxpayers would prefer negotiations to conclude well in advance of year-end to allow additional time for planning. Given the uncertain path for tax negotiations, taxpayers who might be impacted

Q: What are the ‘next steps’ for tax legislation?

This continues to be a fluid situation that could take quite a few twists and turns over the coming weeks and months and one that bears monitoring closely to evaluate potential tax planning opportunities. We will continue to keep you informed as legislation evolves.

For more information, please contact any of the professionals at Cordasco Financial Network.

This report is intended for the exclusive use of clients or prospective clients of Cordasco Financial Network, Inc. The information contained herein is intended for the recipient, is confidential and may not be disseminated or distributed to any other person without the prior approval of Cordasco Financial Network, Inc. Any dissemination or distribution is strictly prohibited. Information has been obtained from a variety of sources believed to be reliable though not independently verified. Any forecasts represent future expectations and actual returns, volatilities and correlations will differ from forecasts and it should not be assumed that any of these expectations will become actual results. Outputs and opinions are as of the date referenced and are subject to change based on market or economic conditions. This report does not represent a specific investment recommendation. Please consult with your advisor, attorney and accountant, as appropriate, regarding specific advice. Past performance does not indicate future performance and there is a possibility of a loss.