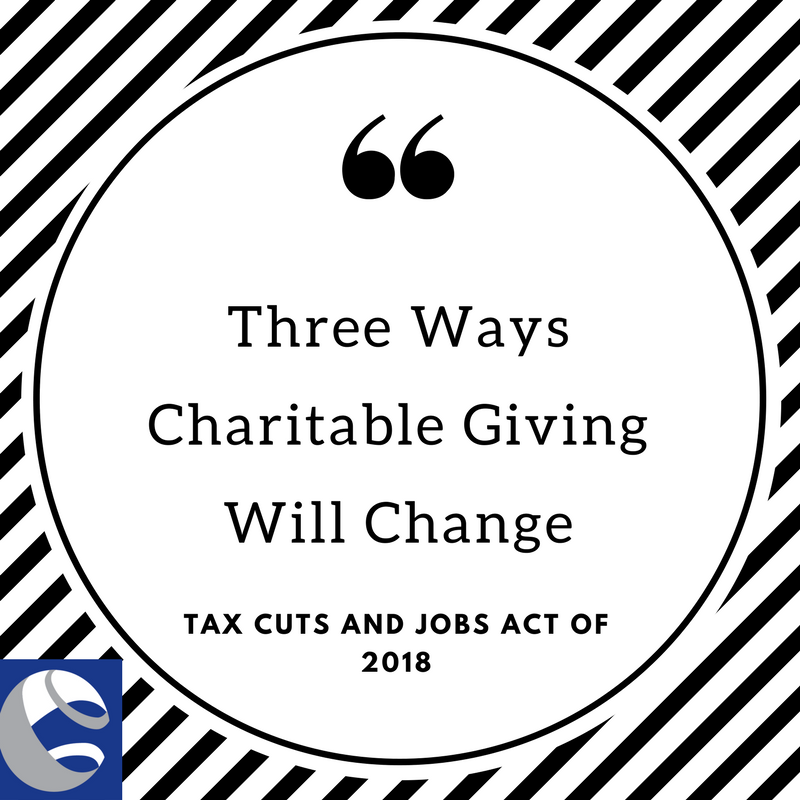 Much has been made of the 2018 tax bill signed into law on December 20th . It is both a reduction in many people’s taxes for next year and a substantial increase in the country’s debt for the future. One impact of this bill that has gotten little coverage, however, is how it affects individual giving.

Americans are a generous bunch. We give our time, talents, and treasure to the more than 2 million

nonprofit organizations in the United States today. These organizations offer broad services, accounting for 1 in 3 college degrees and the overwhelming majority of hospitals, museums, and emergency shelters. In total, nonprofit organizations account for a greater portion of the nation’s GDP than does the military. What many Americans don’t know is that roughly 80% of the operating budget of nonprofits comes from individuals, not corporations, foundations, nor the government. Gifts are made at every income level, too, and American have a tax incentive to make these gifts: Charitable contributions are on the list of things that “count” as itemized deductions.

1. Incentives: The 2018 tax bill changes the way individuals can “count” their charitable gifts. By doubling the standard deduction, itemizers are expected to drop from 1 in 3 tax returns filed to 1 in 20.

This matters because anyone with less than $12,000 of deductions ($24,000 for a couple) will likely have less of a tax incentive to donate clothes, give to their church, or assist a Wounded Warrior.

2. The Status Quo: Incentives for generosity have existed in the U.S. tax code since 1917 and giving has grown substantially since then ($390 Billion in 2016). Now that you know how the incentives have changed, consider this: Giving had already gone down significantly for the middle class in the last decade and a half. During the same period, giving exploded for all earners above that.

3. Consolidating Control: Nonprofit organizations are getting more donations this year than last. They are getting them from fewer and fewer people. This is problematic for nonprofits (fewer donors means more risk that any one donor can impact an organization’s effectiveness) and for the general public (giving isn’t as quickly “rewarded” as a good behavior).

This tax change could simplify some things for many tax filers. It could also have unintended consequences for the incentives we have to do good in our communities.