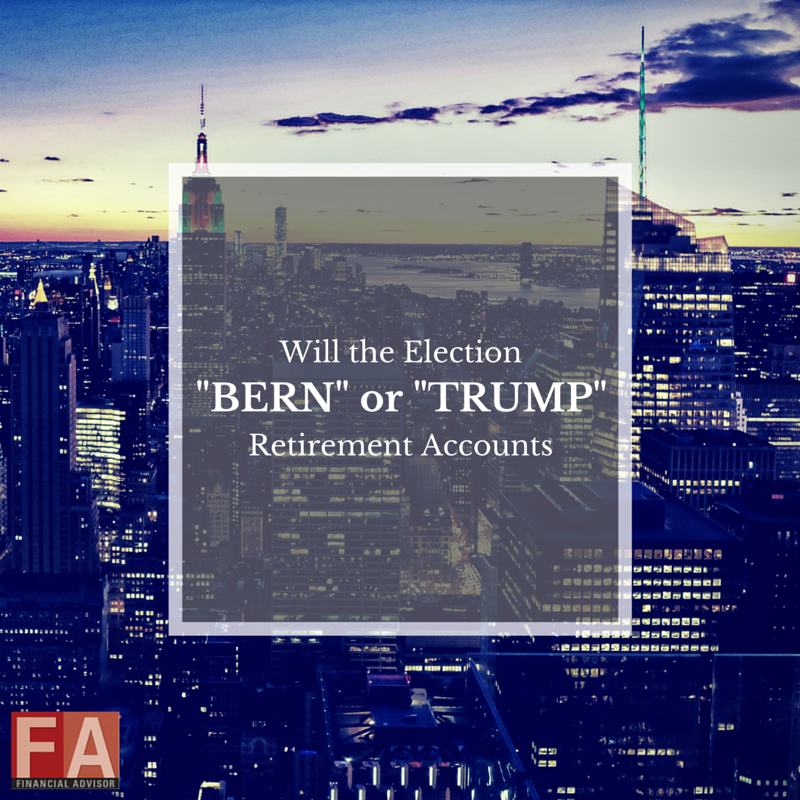 “I’ve heard the concerns, and it’s not just Americans,” says Jamie Hopkins, associate professor of taxation and co-director of the New York Life Center for Retirement Income at The American College. “The International Economic Society has listed a Donald Trump presidency among the 10 biggest risks for the world economy, there are economists worried about the direction our politics are taking moving forward.”

A recent survey of affluent investors conducted last month by Spectrem Group found that the political climate is the most influential element shaping their economic outlook, beating out other issues like international relations, terrorism, market conditions and oil prices, but retirement experts say the concerns may be overblown.

Matthew Carbray, a CFP and partner with Ridgeline Financial Planners in Avon, Conn., says that he can understand the concern.

“Deficits, lower revenues, a need for major corporate tax reform legislation, repatriation of jobs that have gone abroad, those things are at the forefront of our clients’ thinking,” Carbray says. “We shouldn’t really be concerned about how the stock market is going to react or who is going to win the election, we should be concerned about how we get out from the incredible hole we’ve dug ourselves into.”

Despite the high stakes in this year’s election, those concerns might be unwarranted, says Eric Sajdak, CIO and partner at Fox River Capital, an Appleton, Wisc.-based RIA.

“In a lot of cases, I think the concern is irrational,” Sajdak says. “Politics plays some role in investment performance and the retirement landscape, but overwhelmingly the individual has more of an effect on his or her own situation than politics will.”

Steve Cordasco, of the Philadelphia-based Cordasco Financial Network, says he isn’t hearing concerns so much as passion for political ideals. While the television and radio talk show host enjoys airing provocative views in the media, discussing politics is more difficult when it comes to providing professional advice. He says his clients feel torn between perceptions of cronyism in the Republican Party and socialism in the Democratic Party.

“It’s interesting because talking politics is what happens now in this financial space,” Cordasco says. “For many advisors, this is the first time they’ve had to deal with so much political passion from their clients, and some are likely scared to say what they think about this election cycle.”

Ed Horwitz, director of Creighton University’s Center for Insurance and Risk Management, says that investors should be reminded that the president lacks the ability to make permanent major policy changes.

“It really depends on the president and their administration, but in general the president talks about policy and the things they would like to see happen, and it has been up to Congress to come up with the rules and laws implementing policy,” Horwitz says. “The president has very limited power, they can’t really move the economy. A president can’t change the tax codes or how funds are appropriated without Congress.”

A president does have the ability to suggest an agenda for Congress, Horwitz says, and that could make the 2016 election important for retirees and near-retirees.

“Obviously, our clients know that changes need to be made to the system and soon, but we don’t think that the changes will impact the older generations,” Hellenbrand says. “I think adjustments and changes are going to be made for younger generations, the people who have time to plan, and you’re probably going to see a scale back of benefits for those people. People in or near retirement probably won’t be impacted.”

That means the next presidential administration will be one of the last with an opportunity to address the country’s ailing federal old-age entitlements, Social Security and Medicare.

“On both sides of the aisle, we’re hearing support for existing retirees,” Horwitz says. “Because of the way things are going, though, one side or the other can’t solve this problem, these programs will have to be fixed with bipartisan support. Until there’s bipartisan support, one side will propose a solution and the other side will go on defense and oppose it.”

Time is of the essence for both programs. The Trustees of the Social Security and Medicare trust funds estimate that in 2034, Social Security will be unable to account for its budget deficits and at that time the program will pay approximately 75 percent of their expected benefit. The Trustees predict that the Medicare fund will run dry in 2030, leaving the program only able to pay 86 percent of its expected benefits.

Carbray says that the current partisan gridlock does not bode well for a reform of either program during the next administration.

“We have to be realistic to people and explain to them that some of the entitlements that they were promised, just like the pensions they have worked for, might not be there when they need them,” Carbray says. “You have to prepare for the fact that the government may not be able to meet the full obligations of what they’ve promised you. That’s a huge challenge for us in the advisor community.”

Sajdak believes that the program is likely to be shored up with increased taxes on higher earners and the full retirement age delayed further past 67 years old for younger workers.

Hellenbrand says that the winner of the next presidential election might not enact entitlement reforms, but could be an indicator of how public sentiment feels about the future of Social Security and Medicare, “if we see someone elected who is an idealist, who is staunch about not making changes, or who wants to make radical changes to the programs, we’re more likely to delay, delay, delay.”

Retirement advisors and investors should also pay close attention to tax policy ahead of an election.

“I’m always looking at how investment income is going to be treated, is it going to be taxed like ordinary income or capital gains,” Horwitz says. “Typically, it’s been the left that has proposed using taxes to raise money to fund their initiatives. That’s not always a bad thing for retirees, for example, additional taxes came in to support Medicare as a result of the Affordable Care Act.”

Regardless of who wins in November, the wealthy will likely pay more, says Hopkins.

“We’re in a rising tax rate environment,” Hopkins says. “The themes present in this election are going to impact high-net-worth individuals, and looking across party lines that seems to be one thing that Democrats and Republicans can agree on — any reforms are likely to be paid for with taxes on high income people, that’s their revenue source.”

As they retire, baby boomers, like previous generations, become the most influential voting bloc, but as the larger millennial generation becomes eligible to vote, they grow in potential influence.

“They’re active on social media, in tune with the issues and knowledgeable about candidates,” Carbray says. “There is a shift in terms of the electorate, those millennials are going to lead this country. They want big changes, and that’s why I feel it may be a long time before we see a Republican back in the White House.”

The shifting demographics and heated campaigns exacerbate uncertainty, says Cordasco, which is why advisors should proactively engage their clients in political discussions.

“We ask them questions about their views to get them to open up, and our clients want to talk about it,” Cordasco says. “We need to be willing to speak clearly about what might happen if Trump or Clinton are elected. People are scared because they don’t know something. People are worried that someone is going to take something from them, whether it’s guns or other liberties, or a piece of the nest egg. We need to work through that and try to create some clarity for them, and that ultimately builds their comfort level.”

Even though many questions about the candidates and where they stand on retirement issues remain unanswered, Horwitz says advisors should counsel their clients to remain calm.

“We’ve had a lot of these changes, people tend to forget that a lot was done around Medicare in the Bush and Clinton administrations,” Horwitz says. “These changes, for the most part, have been viewed as positive. Advisors should be telling their clients to be informed and to pay attention to what’s going on, but also to go do some objective research of their own. It’s hard to get objective information anymore in terms of what the candidates really stand for.”

At the same time, the heated rhetoric on the campaign trail troubles Horwitz.

“This year is unlike anything I have ever seen, it troubles me that we have such a divided country,” Horwitz says. “The problems we face as a nation are ones that we’re going to have to come together to solve.”

This article was written by Christopher Robbins and originally published by Financial Advisor Magazine.

View the original article by clicking this link: http://www.fa-mag.com/news/will-the-election–bern–or–trump–retirement-accounts-25930.html?section=43