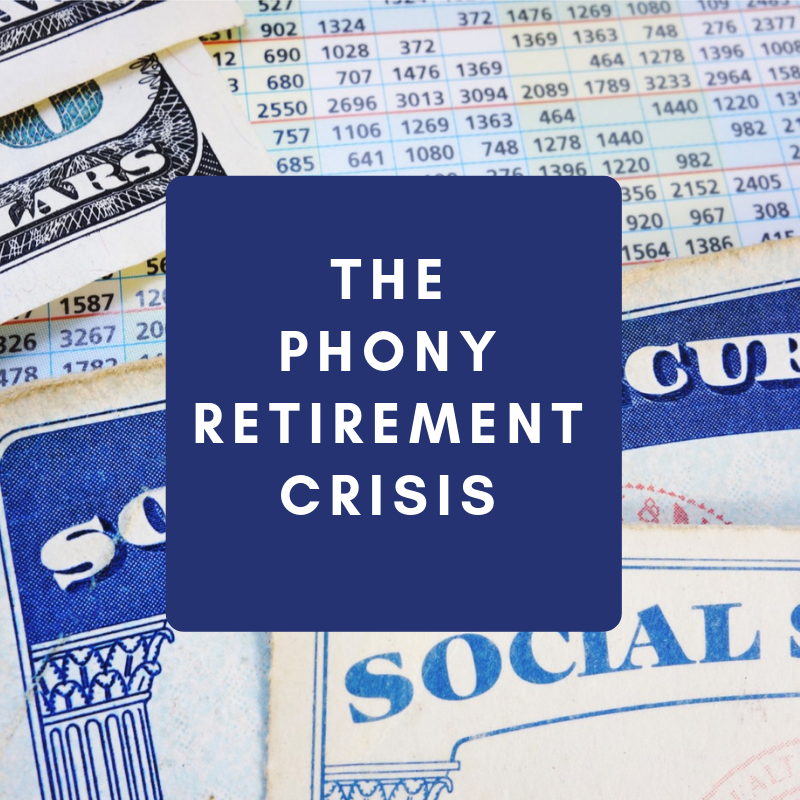 Contrary to the alarms, household savings are growing. But government plans are underfunded.

Lawmakers are taking action to deal with the “retirement crisis.” More than 200 House Democrats are sponsoring a bill to expand Social Security benefits, funded by a dramatic increase in taxes. California, Connecticut, Illinois and Oregon have established state-run retirement plans for private sector-workers, which many progressives hope will supplant 401(k)s.

But there is no retirement crisis among either today’s retirees or tomorrow’s. Eight in 10 retirees tell Gallup they have enough money to “live comfortably,” and 6 in 10 working-age households say the same. Seventy-five percent of retirees tell the Federal Reserve’s Survey of Consumer Finances they have “at least enough to maintain [their] standard of living,” up from 61% in 1992. Census Bureau research that uses Internal Revenue Service data to measure retirees’ incomes found that the over-65 poverty rate was only 6.7% in 2012, down from 9.7% in 1990 and lower than any other age group.

What would a retirement crisis look like? Warning signs might include low participation in retirement plans, insufficient retirement-plan contributions, falling retirement savings and stagnating retiree incomes. We see none of these.

More Americans are saving more than ever for retirement. Participation in traditional defined-benefit pensions peaked at 39% of employees in 1973. Today, the Social Security Administration says that 61% of workers, including 80% of married couples, participate in a plan. Nonsavers are mostly low-earners, who will receive high “replacement rates” from Social Security, or young employees who will save as their earnings rise.

Retirement-plan contributions are up as well, Labor Department data show. From 1975-84, total employer and employee contributions averaged 6% of employee wages; over the past decade the average has been 8.3%. Retirement savings in employer-sponsored plans and individual retirement accounts are at record levels, rising sixfold since the mid-1970s.

Retirement incomes have risen too. According to Fed data, the median retiree household’s income grew by 56% above inflation from 1989 through 2016, versus only 4% real growth for working-age households. Incomes grew faster at the poorest fifth percentile retirees than at the 95th percentile of the working-age population.

The Social Security Administration’s sophisticated computer models don’t project a retirement crisis. Incomes will continue to rise, old-age poverty will fall, and the share of retirees unable to maintain their standard of living will be similar to today. The median retiree born during the Great Depression had an income equal to 109% of his average inflation-adjusted preretirement earnings. For Gen Xers born from 1966 to 1975, the Social Security Administration projects a median replacement rate of 110% of real average preretirement earnings.

Yet, while household retirement savings are growing, government retirement plans—Social Security, government employee pensions and the federal Pension Benefit Guaranty Corp.—are underfunded by up to $26 trillion. The World Economic Forum estimates that 85% of the retirement savings gap in the U.S. is owing to government underfunding, not workers’ failing to save. The same is true world-wide, and for the same reason: political pressures to promise benefits without levying the taxes to pay for them. Sen. Bernie Sanders has introduced legislation to expand Social Security’s promised benefits without fully funding existing benefits. States are gambling, through riskier investments and so-called pension-obligation bonds, to keep generous employee pensions plans afloat.

Progressives wish to move away from the private-sector plans that have massively expanded retirement savings and retiree incomes in favor of government provision of retirement income, which is nowhere fully funded. If they get their way, a real retirement crisis could materialize.

Abdrew G. Biggs is a resident scholar at the American Enterprise Institute.

Posted with the permission of Andrew G. Biggs is a resident scholar at the American Enterprise Institute (AEI), where he studies Social Security reform, state and local government pensions, and public sector pay and benefits.